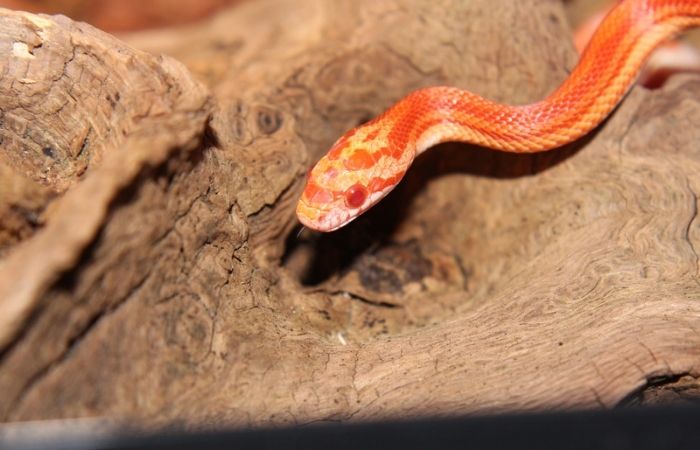 Corn snakes are possibly the best species of snake to keep as pets, especially for novice hobbyists who are keeping snakes for the first time. Their colorful appearance, docile nature, and simple care requirements have won over pet owners and commercial breeders alike.

Although taking care of a corn snake isn’t difficult, the snake still requires the proper environment, diet, and care to live a full, healthy life—as long as 25 years.

Corn snakes vary in size and coloration, but almost all of them have a clean checkerboard pattern of black and white squares on the underbelly, and some in southern Florida have an orange or yellowish uncheckered belly. The body itself is shaped like a loaf of bread, with a flat bottom, vertical sides, and a rounded top. This muscular design is what allows the corn snake to be such an accomplished climber.

Corn snakes are among the most frequently bred snakes: hobbyists and professional breeders produce thousands of them every year. Selective breeding allows for a variety of different color variations among corn snakes. The following are some of the most common corn-snake morphs.

Just as genes contribute to a corn snake’s coloration, genes also determine the animal’s pattern. Breeders can manipulate these genes to create new morphs displaying various patterns, including the following:

Corn snakes are very mild mannered and demand little in captivity, allowing them to thrive under the care of even the most inexperienced hobbyists. They rarely, if ever, show signs of aggression and are among the most easily handled of all snakes.

Corn snakes are a type of rat snake that first appeared about 55 million years ago and once had a natural range in North America, Europe, and Asia. Corn snakes live only in North America, from New Jersey south through the Florida Keys and west through Illinois and the Mississippi River Valley.

Within their ecosystem, corn snakes are accomplished predators that survive by preying on any warm-blooded animal they can subdue. They may venture into treetops, barn lofts, attics, or even straight up brick walls in search of nesting birds or their eggs. They kill their prey by constriction—after biting, they loop themselves around their prey several times and squeeze until the animal suffocates.

Corn snakes have a very keen sense of smell, many times more powerful than that of humans. Situated in a cavity at the roof of the mouth, a sensory organ called Jacobson’s organ registers scent particles that adhere to the tongue, detecting any prey or mates that are or have been in the area. Once a corn snake smells out its prey, it relies on its motion-sensitive vision to pinpoint the rodent or bird and direct its strike.

Is Your Home Right for a Corn Snake?

Before you bring a corn snake into your home, be sure that you can provide the care it requires to thrive. A healthy corn snake can live for up to 25 years or more in captivity, so be prepared for a long-term commitment to your snake before purchasing one.

Remember that even though you might love snakes, not everyone else does. Before you bring home a corn snake, make sure that no one in your household is afraid of snakes or has objections to living with one. You should also discuss the snake’s diet with the other members of your household. Many people are squeamish about the whole-rodent diet your new pet will require.

Get Our News About Fantastic Creatures

We use cookies on our website to give you the most relevant experience by remembering your preferences and repeat visits. By clicking “Accept All”, you consent to the use of ALL the cookies. However, you may visit "Cookie Settings" to provide a controlled consent.
Cookie SettingsAccept All
Manage consent

This website uses cookies to improve your experience while you navigate through the website. Out of these, the cookies that are categorized as necessary are stored on your browser as they are essential for the working of basic functionalities of the website. We also use third-party cookies that help us analyze and understand how you use this website. These cookies will be stored in your browser only with your consent. You also have the option to opt-out of these cookies. But opting out of some of these cookies may affect your browsing experience.
Necessary Always Enabled
Necessary cookies are absolutely essential for the website to function properly. These cookies ensure basic functionalities and security features of the website, anonymously.
Functional
Functional cookies help to perform certain functionalities like sharing the content of the website on social media platforms, collect feedbacks, and other third-party features.
Performance
Performance cookies are used to understand and analyze the key performance indexes of the website which helps in delivering a better user experience for the visitors.
Analytics
Analytical cookies are used to understand how visitors interact with the website. These cookies help provide information on metrics the number of visitors, bounce rate, traffic source, etc.
Advertisement
Advertisement cookies are used to provide visitors with relevant ads and marketing campaigns. These cookies track visitors across websites and collect information to provide customized ads.
Others
Other uncategorized cookies are those that are being analyzed and have not been classified into a category as yet.
SAVE & ACCEPT