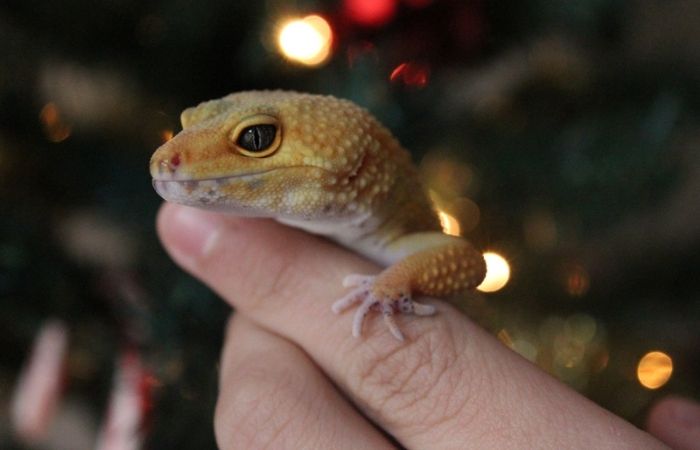 These lizards have less demanding care requirements than other exotic lizard species. They don’t grow very big and therefore don’t require a large cage for their maintenance—a useful characteristic for people with limited living spaces. They also thrive for years on readily available food sources, don’t require special lighting, and acclimate easily to a variety of living conditions.

Leopard geckos range in size from 3.5″ (8 cm) long as babies to up to 8″ (20 cm) or slightly more as adults. The head is similar to that of most geckos: triangular, with a distinct neck. The skin has a bumpy appearance due to small tubercles (wartlike protrusions) that appear on the surface.
As babies, leopard geckos have purplish-brown and light-yellow bands along their bodies, but as they reach maturity, the dark bands start to break up into dots, creating the spotted pattern from which these geckos get their name. The background color can range from a muddy gray to a bright yellow to a brilliant yellow, depending on the individual. The spots are usually a darker brown and serve to conceal the gecko from predators in the wild.

After a boom in the captive breeding of leopard geckos, numerous colors and patterns not found in the wild have recently emerged in the pet market. These human-produced colors and patterns are known as morphs.
There are currently more than 30 different morphs of leopard gecko available, with new ones generated almost every year. Most of these new color morphs are prohibit­ively expensive to the casual gecko keeper, but over time they become more affordable to the general public. The following are some of the more common leopard gecko varieties that you’re likely to find:

If you want an animal that will respond to you as a cat or a dog will, the leopard gecko may not be for you. It will, however, respond in a manner indicating that it recognizes you. If you open the cage, for example, your leopard gecko is likely to immediately wander over to inspect what you’re doing and may actually climb up on your hand—probably hoping for some food.

There is also a wide variation in personality among individual leopard geckos. Some may squeal with discontent every time you look at them or attempt to maintain their enclosure (although this behavior is uncommon). Most leopard geckos are very friendly and accommodate some interaction with their human keepers, though as with most herps, excessive handling can be stressful for the lizard.

The Leopard Gecko in the Wild

Leopard geckos have a natural range from northern India, Pakistan, and possibly Afghanistan. They are terrestrial and spend most daylight hours in the comfort of their underground homes. They live in arid regions, including grasslands, that have substantial cover. They eat insects and other invertebrates in the wild, as well as small mammals and even other lizard species—a diet that is fairly easy to recreate in captivity.

As long as you provide enough space in your enclosure, you should be able to house a small group of leopard geckos together if you choose to do so. Just don’t keep more than one male leopard gecko in the same cage. When the males become mature, they will start fighting. You may not actually see them skirmish, but you will notice bite wounds and missing tails. To avoid this, house only one male per enclosure, or keep only multiple female leopard geckos.

Get Our News About Fantastic Creatures

We use cookies on our website to give you the most relevant experience by remembering your preferences and repeat visits. By clicking “Accept All”, you consent to the use of ALL the cookies. However, you may visit "Cookie Settings" to provide a controlled consent.
Cookie SettingsAccept All
Manage consent

This website uses cookies to improve your experience while you navigate through the website. Out of these, the cookies that are categorized as necessary are stored on your browser as they are essential for the working of basic functionalities of the website. We also use third-party cookies that help us analyze and understand how you use this website. These cookies will be stored in your browser only with your consent. You also have the option to opt-out of these cookies. But opting out of some of these cookies may affect your browsing experience.
Necessary Always Enabled
Necessary cookies are absolutely essential for the website to function properly. These cookies ensure basic functionalities and security features of the website, anonymously.
Functional
Functional cookies help to perform certain functionalities like sharing the content of the website on social media platforms, collect feedbacks, and other third-party features.
Performance
Performance cookies are used to understand and analyze the key performance indexes of the website which helps in delivering a better user experience for the visitors.
Analytics
Analytical cookies are used to understand how visitors interact with the website. These cookies help provide information on metrics the number of visitors, bounce rate, traffic source, etc.
Advertisement
Advertisement cookies are used to provide visitors with relevant ads and marketing campaigns. These cookies track visitors across websites and collect information to provide customized ads.
Others
Other uncategorized cookies are those that are being analyzed and have not been classified into a category as yet.
SAVE & ACCEPT